“I Love You, You’re Perfect, Now Change” is a modern comedic take on all aspects of relationships 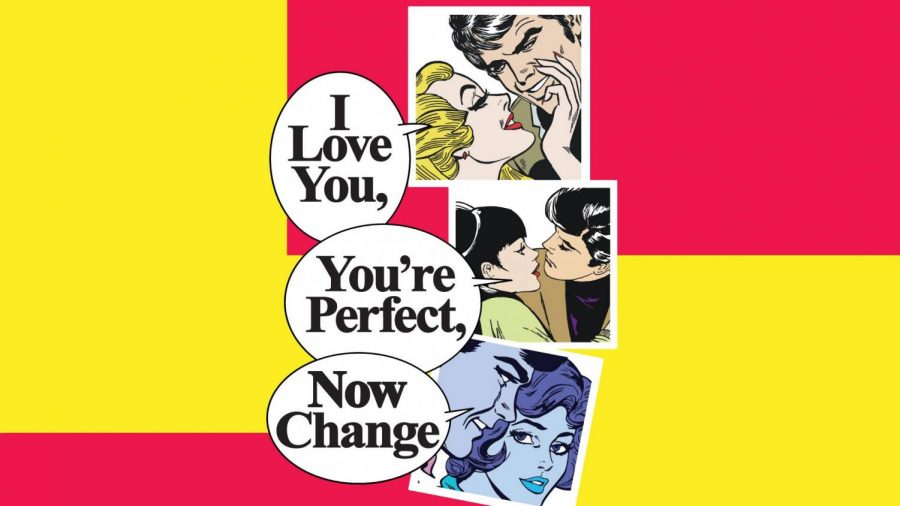 Single people, dating couples and married couples alike can all relate to the comedic 21st century spin on the struggles of dating, marriage and having children in IU Southeast Theater’s production of “I Love You, You’re Perfect, Now Change.”

The musical’s book and lyrics were written by Joe DiPietro and the music was written by Jimmy Roberts. “I Love You, You’re Perfect, Now Change” is originally the longest running Off-Broadway musical revue.

The first act focused on how young couples develop and change while the second act focused on how married couples develop and change. The progression from the stories of young couples to the stories of married couples had a smooth transition thanks to the song “Wedding Vows” at the end of act one and the song “Cantata Reprise #1,” which is about the same characters from “Wedding Vows,” at the beginning of act two. Most of the other scenes in the production were independent of each other, but they were very easy to follow.

Near the end of the production, the scenes became increasingly emotional. In the song titled “Shouldn’t I Be Less In Love With You?,” the husband, played by Gaddis, reflects on the past 30 years he and his wife have spent together. Gaddis’ vocals were unmatched throughout the entire show, but in that scene they were somehow even more outstanding. His vocals added an element to the scene that enhanced the emotion and made his character shine.

Another surprisingly emotional scene was “The Very First Dating Video of Rose Ritz.” Rose Ritz, played by Johnson, begins by creating her very first dating video since her husband left her. Humorous moments occur along the way.

As it progresses, however, the scene becomes much more emotional as Rose reveals more details about her divorce, striking a palpable emotional chord with the audience. Johnson’s acting in the scene was absolutely phenomenal. Her portrayal as Rose was a highlight of the show.

One outstanding part of the production was how each actor was able to transform into their different characters almost flawlessly. Tanselle, who played seven parts over the course of the production, did a fantastic job to that effect. She essentially portrayed every type of character — including a single woman trying to find her match named Betty, a mother, and a recently widowed older woman named Muriel — with ease. Watching Tanselle go from character to character during each scene was an enjoyable part of the production.

The beauty of “I Love You, You’re Perfect, Now Change” is its portrayal of both the realistic and stereotypical parts of relationships in a comedic yet emotional way. The more emotional scenes thrown in among the comedic scenes beautifully showcased the range of the actors and actresses.

The continuity between the opening number and the closing number was a nice touch. Both numbers were similar but each had their differences. The opening number, titled “Cantata For A First Date,” was about the emotions surrounding a first date. The closing number, appropriately titled “I Love You, You’re Perfect, Now Change,” was about loving someone and wanting to change them over time.

Both numbers featured the entire cast and shared some similarities in their scores. Some musical productions have opening and closing numbers that do not correlate, but “I Love You, You’re Perfect, Now Change” did. The progression shown between them tied up loose ends and ended the show in a satisfying way.

Overall, “I Love You, You’re Perfect, Now Change” was a great start to the season for IU Southeast Theater.

Performances of “I Love You, You’re Perfect, Now Change” have already finished, but performances of IU Southeast Theater’s upcoming production of “The Laramie Project” begin in the Ogle Center on Dec. 5 and run through Dec. 8.