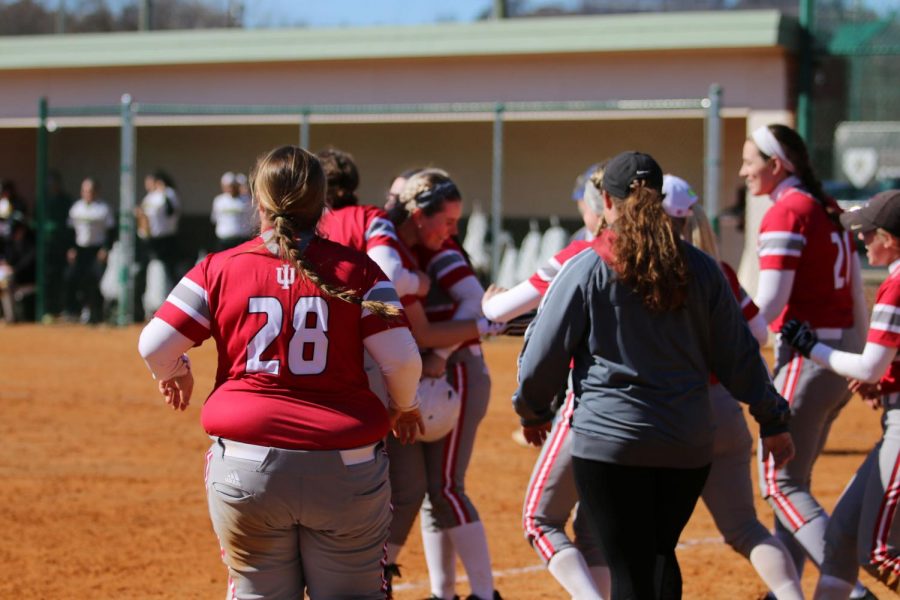 Sydney Seger gets mobbed by teammates after delivering a walkoff RBI single in the ninth inning of game two of a doubleheader versus Point Park University.

Before the start of game one, Grenadier softball players of years past were honored as part of alumni day, most notably Brookelyn Visker and Elizabeth Fanning, who threw out the ceremonial first pitch. Fanning is a cancer survivor while Visker recently finished her final round of chemotherapy.


Game One
Game one saw the Pioneers send out senior Ashley Iagnemma to face Emily Weiss and the Grenadiers, who struck first in the bottom of the first starting with back-to-back hits from Kaitlyn Flowers and Maggie Lubbehusen. A wild pitch scored Flowers, followed by a single by Lindsey Keen to score Lubbehusen.

Despite the Pioneers scoring a run in the top of the second, the Grenadiers answered in the bottom of the third, making the score 3-1.

In the fifth, the Pioneers scored another run. The Grenadiers answered once again in the bottom half with two more runs, courtesy of an RBI double by Lubbehusen to score Morgan Keefer, as well as pinch runner Reecie Gilliam scoring on an error to make the score 5-2 Grenadiers.

Weiss would give up only one hit in the final two innings, polishing off a complete game victory. She allowed only two runs, striking out six while walking two.

Lubbehusen led the way offensively for the Grenadiers, going 3-for-3 with two RBIs in the win.

“It feels good because our team always needs someone to step up,” Lubbehusen said. “Just adding to that, it keeps the intensity up.”
Game Two
The Grenadiers’ Becca Schoenung and Pioneers’ Katie Tarr started game two locked in a pitcher’s duel, keeping the game scoreless through the first four innings. In the fifth, the Pioneers broke through when Courtney Blocher doubled to left center, scoring Maddie Horn.

Weiss replaced Schoenung with one out in the sixth, but the Pioneers would add insurance thanks to a Hailey Leitner RBI double and a Chandler Krelow RBI single.

The Grenadiers closed the gap slightly in the bottom half when Maggie Lubbehusen reached on a dropped popup. Sydney Seger ripped a line drive into the left-centerfield gap for a triple, which scored pinch runner Miranda Miller. Seger tried to score on a flyout to center, but Horn’s throw gunned her down at the plate.

In the seventh, Gilliam reached base on a one-out drag bunt, followed by a single by Kendyl Olds. The left-handed hitting Keefer then singled to deep center to score Gilliam, followed by a perfectly placed drag bunt to score Olds and tie the game.

They had a chance to win the game after pinch-hitter Baylee Krueger singled to load the bases, but Seger lined to left and Flowers struck out to send the game to extras.

Schoenung reentered the game to start the eighth after Emily Weiss suffered a back injury. She initially got into trouble on back-to-back one-out hits but got Shannon Davis to pop up and Krelow to fly to right to end the threat.

In the ninth, Keefer drew a leadoff walk and Keen advanced her on a sacrifice bunt. Despite Krueger striking out, Seger, who had been struggling the past few weeks, came through with a single to left, scoring Keefer to complete both the comeback and the sweep.

“I’ve been struggling the last few games, but I’ve been working back, trying to get back to my fundamentals of hitting,” Seger said.
“I’ve just been taking it one game at a time, trying to see the ball and get my swing back to where it needs to be.” -Sydney Seger
With the sweep, the Grenadiers finish the weekend homestand 3-1 and are now second in the RSC standings behind Rio Grande.

“[Seger] was overdue. It was just a matter of time and it was the right time for us,” Witten said. “I have to give our ladies some credit, I was challenging them during the game when they didn’t make the best decisions, but they didn’t get down on themselves. It took everybody’s effort.”