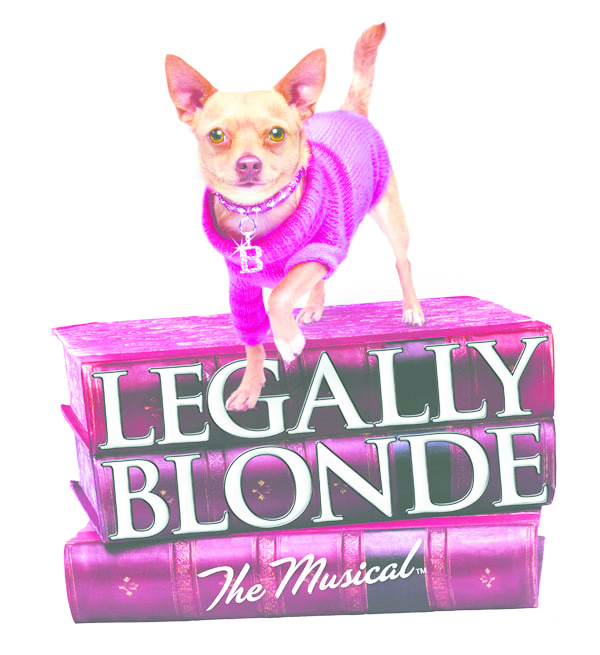 Funny enough, the original Broadway Elle got to experience it for herself.

Laura Bell Bundy, the Broadway Original Elle Woods, visited the group for a mini-concert. I can only imagine what she had to say about Floyd Central’s Elle, Caroline Siegrist.

The role of Elle is one that takes great balance to perform and takes great character work to live up to the standards Reese Witherspoon set in the original movie. There are contradictory character traits that the actor must balance as Elle grows into the woman she wants to be.

However, there are many aspects of Elle that do not change and make her the genuine, good-hearted character we all love.

Siegrist accomplished all of this while never taking a break. The character rarely leaves the stage, and appears in almost every single scene in the show. On top of that, she killed the choreography and vocals. There were things she added vocally that I wish Laura Bell Bundy would have done in the original production.

“Legally Blonde” is not an easy show to do. The show is fast-paced, energetic and relies on actors who can keep a consistent stamina. The acting must have a balance of sincerity and fun. The technical aspects change constantly and require much planning and mapping out to tell the story efficiently.

It also requires a task that many highs school productions fail at; playing believable older characters. While the age gap is not too wide, it is enough to make this production either fantastic, or ridiculous and embarrassing considering many of these students may not have been born when the movie came out.

As a whole, the cast brought the most energy I have ever seen in a Floyd Central production. I have seen this show multiple times and know every song by heart, but the group kept me engaged the entire time.

They kept the songs, lines and choreography fresh. There is video to the original broadway production on Youtube, which gives students the easy way out of watching and simply copying what the original cast did. However, they were innovative and did not settle for always doing it how the broadway cast did.

The choreography made the show pop, and I was captivated by the skills the cast brought to each number. The choreography was definitely amped up, and the cast performed each multiple huge dance numbers like they were not exhausted from the last.

One of the songs is a whole choreographed number with jump ropes. If one person messes up, it not only immediately draws your eye right to them, but it is difficult to get back in sync with the rest of the group. You could tell how hard each individual worked to ensure they not only tripped on their jump rope, but made the number as clean and high-energy as possible.

The set popped and brought to life the many different scene settings that rapidly change throughout the show and within single numbers. The costumes brought out the best in the early 2000’s fashion and successfully mimics a lot of the costumes featured in the movie. The lighting and sound tied it to the show together.

Normally the aspect of lighting is only mentioned when it is noticeably bad. However, there were times when lighting dramatized and emphasized key moments throughout.

The show does include some language, dance moves and costumes that may be offensive to some. As an adult, I personally did not mind the language used nor did it bother me that high schoolers were saying it, but I could see why parents may not want to bring their young children.

The key takeaway for me, was the powerful feminist message I felt. I have seen the movie and the show multiple times, but I never felt such a strong relatibilty to Elle and such a powerful feeling of what can happen when woman work together.

Maybe this feeling has come with age and my own experiences, but needless to say the feeling was overwhelming and even made me emotional at times. Whether it is the musical or the movie, if you have not seen this movie in a while, it is worth another watch.

Overall, the production had excellent quality in every aspect. Floyd Central has recently been known for its spearheading high school versions of broadway Disney shows, but this just goes to show that their excellence and innovativeness can come from productions already widely done.

Although this production has already ended, you can see their last show of the season “Boeing, Boeing” which runs in May.