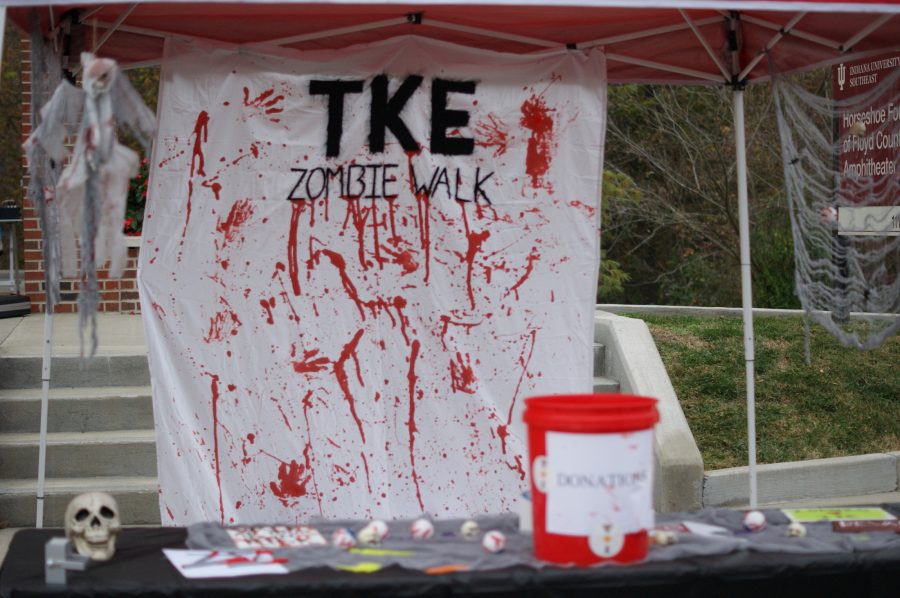 Bullet holes.
Tattered clothes.
Is this a scene from The Walking Dead? No, it’s the Tau Kappa Epsilon Zombie Walk at IU Southeast.
The zombie walk, which TKE hosted as a fundraiser for St. Jude’s Children’s Hospital, took place on Thursday, Oct. 27 at the IU Southeast Amphitheater.
“Our hearts are with St. Jude’s and we have raised $4,000 this year,” said Nick Bailey, business junior.
Friends and supporters of TKE showed up to give their support. They also had support from fellow greek life.
Gabby Philpott, psychology sophomore, said as a member of Sigma Kappa, she was there to support TKE.
The crowd gathered around the grill for a little warmth, while enjoying their hot dogs and playing Frisbee. Others were in tents getting zombiefied.
The Hoosier’s, a pop/rock band from Indianapolis, took the stage to bring a little life back to the undead crowd.
In between sets, there were announcements of how much money had been raised in donations.
At 7:15 p.m., $800 had been raised.
By the end of the night, that $800 had become $1,000.
People who were participating in the zombie walk began to line up and Michael Jackson’s “Thriller” began to play from the portable radio. The zombies proceed to filter through the parking lot before approaching Knobview Hall and spilling out onto the sidewalk to begin their mile walk around campus.
As the event winded down, Caley Thompson, music business junior, took the stage to tell a joke.
“What does it take to be a zombie?” Thompson asked. “Dead-a-Cation.”