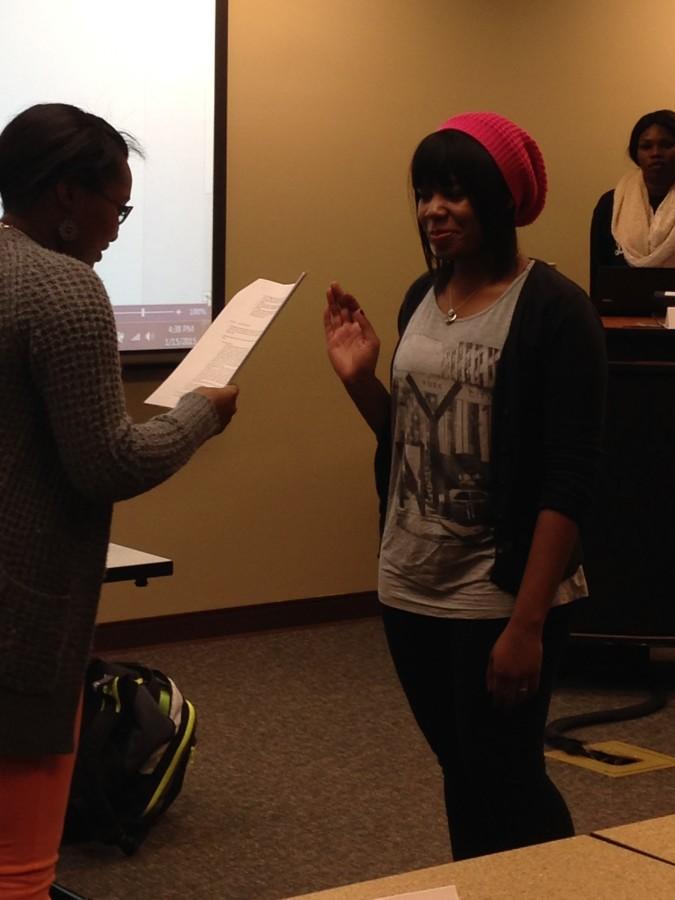 Angel Russell, sociology junior and SGA chief justice, swears in Rebeccah Nesbitt, international studies sophomore, during the SGA meeting on Thursday, Jan. 15. Nesbitt is the newest senator in the SGA

During the first Student Government Association meeting of the semester at 4:30 p.m. on Thursday, Jan. 15, the members discussed the possibility of hosting an event during homecoming week.

According to Bill 52-05, the event would occur on Wednesday, Feb. 11 from 12 to 1:30 p.m. in The Commons. Students would be able to eat pizza and play games such as cornhole during the event.

Trent Wallace, advertising and communications junior and SGA vice president, said the event would enable the SGA to help and reach several students.

“Our organization’s overall goal is to help the students in whatever way we can, and so by doing this, we hope to provide a fun time, a fun learning environment which fits into our long term goal of helping the students,” Wallace said.

The SGA members will continue to discuss the bill during the next meeting.

Additionally, Rebeccah Nesbitt, international studies sophomore, was sworn in as a senator by Angel Russell, sociology junior and chief justice.

“I’m super excited because I want to get more involved with the student organizations at IUS, and I really love it here, so it’ll be fun to meet new people,” Nesbitt said.

Toward the end of the meeting, Seuth Chaleunphonh, dean of student life, discussed the Martin Luther King Day of Service opportunity on Monday, Jan. 19 from 11 a.m. to 2 p.m. Chaleunphonh said SGA members could participate and earn iCHIP points for the organization.

Chaleunphonh said SGA members, as well as other IU Southeast students, could choose to volunteer at one of three New Albany locations: Green Valley Elementary School, the Ed Endres Boys and Girls Club or Our Place.

He said he will appoint a member to the election commission by the end of January.

After the meeting, Moore said he believes this semester will be good for the SGA.

“I think we had a really good semester in the fall, building a relationship with [Chancellor] Dr. Wallace and representing the students as well, so I think that we’ll just build on that,” Moore said. “We’ve also got some exciting new people in SGA this year that are gonna be leaders, and there’s always opportunities for more people to join SGA.”

Vice President Wallace said the SGA will have a busy semester.

“I think we’ve got a great semester ahead of us,” Wallace said. “We’re doing the homecoming thing, we’re doing GUS talks, hopefully we’ll have an end of the year event, and our elections are coming up. We’ve got a lot of things coming up this spring. I think it’ll be a lot of fun.”

Contact Chris Schoettmer, SGA senate chair, at chmschoe@ius.edu to get information about the SGA.