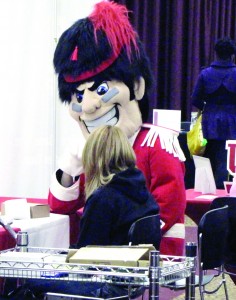 Gus the Grenadier helps out an attendee during the Open House “Map Your Course” on Oct. 29.

IU Southeast held its fall Open House, with the theme “Map Your Course,” on Oct. 29 in the University Center.

Coordinators of the event chose the theme “Map your Course,” to put students on the right track and reduce the stress associated with entering college.

High school seniors from around the IUS recruitment area, including 14 counties in Indiana and five in Kentucky, walked the paths through buildings on tours and attended workshops to get a look at the campus and information about the next steps needed to continue their education.

JoAnna Jarboe, counselor for Admissions and coordinator for high school recruitment, said they used the usual channels for getting the word out about the programs at IU Southeast.

“We have radio spots, press releases and do presentations during study hall in the schools,” Jarboe said, “but the timing and the beautiful weather has really boosted attendance this time.”

There are also four other people on the recruitment team representing schools from Louisville and Indiana, as well as private schools and various other colleges, including Ivy Tech and Jefferson Community and Technical College.

The weather was also in favor of those taking the campus tours, which began in The Commons.

Of the 257 students who attended the event, more than half were preregistered through an invitation they received in the mail.

A large portion of the students were from Kentucky who are eligible for in-state tuition rates through the Metroversity Program, which is offered to five counties in Kentucky — Trimble, Bullitt, Mead, Jefferson and Oldham.

As students arrived at the University Center, they were directed to the Hoosier Room to sign in and check out the 27 booths set up to answer questions.

All available majors were represented by various schools such as Nursing, Education, Continuing Studies and Natural Sciences, as well as services related to student life, such as the Career Development Center, Campus Life and Residence Life and Housing.

Jarboe said she thought on-campus housing was a contributing factor to the successful turnout.

Kelly Tormoehlan, 17, and her friend, Tristan Graham, 17, were brought to the open house by Tormoehlan’s mother, Margaret Tormoehlan.

“We want to stay at Forest Lodge,” Kelly Tormoehlan and Graham said in unison.

Both women were interested in the psychology studies and education.

Margaret Tormoehlan said the fact that the campus is not really part of the city was an attraction.

“It’s smaller and seems safe and secure, which is a relief when thinking of sending my daughter away for school,” Margaret Tormoehlan said.

There was also a workshop called “Next Steps” presented exclusively for students who were already accepted for admittance.

A financial aid workshop was held at two different times and advising sessions for those interested in the graduate education programs were available.

There were also three specific open houses for the School of Business, School of Nursing and the School of Natural Sciences, which gave interested students the opportunity to meet with faculty and staff, see the labs, visit the clinic and conduct experiments.