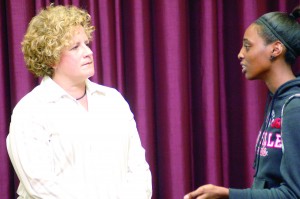 Charlene Strong, gay rights activist, listens to Chaney Reed, psychology sophomore, while she shares her personal experiences of being a member of the LGBT community. Strong spoke to students in the Hoosier Room on Oct. 12 about equal rights for gay and lesbian couples.

When Strong arrived in Indiana she was not feeling well, however, she worked through her sickness to speak to the students about equal rights for gay and lesbian couples on Oct. 12 in the Hoosier Room.

The Student Program Council brought Strong to campus as a gift for the Gay Straight Alliance.

Kathryn Haymon, secondary education junior and president of the SPC, said she decided to bring Strong to IU Southeast after hearing about Strong’s presentation while attending a yearly conference for the SPC.

“We were looking for more diverse events and for more ways to co-sponsor,” Haymon said. “So, immediately after I saw Charlene Strong as one of the people presenting, I knew she was a good speaker [for the] LGBT community.”

The Gay Straight Alliance co-sponsored the event for students.

During the event, Strong shared her emotional story about losing her partner.

She spoke about the injustices that were presented to her when her partner, Kate Fleming, was put in the hospital after nearly drowning in their Washington home during a flash flood.

When Strong tried to see her partner in the hospital, she was denied access by medical personnel because she was not a family member or Flemming’s legal spouse.

“What [the hospital staff] was telling me was that I didn’t count,” Strong said.
The hospital granted Strong permission to visit her partner after receiving verbal affirmation from Fleming’s family on the telephone.

“They would take the word of someone on the end of a cellphone,” Strong said, “but not of my own flesh and blood.”

Strong and Fleming were married for 10 years prior to the flood.

In Washington, where the couple resided, same-sex partnerships were not granted the same legal rights as married straight couples.

“[Our marriage] had no legal recognition, but it was important to us,” Strong said.
Fleming lost her life after the flood, and, since then, Strong has dedicated her life to finding equality for gay and lesbian couples.

She said her hope is that one day no one will have to go through what she did.
Because of the legal boundaries of their marriage, Strong was also met with resistance when planning her partner’s funeral.

Strong said she was a little bitter due to the untimely death of her partner and the injustices presented to her since Fleming’s death, but she said the most important thing to do now is stop these injustices on a national scale.

Strong said so much needs to be done.

“It wasn’t about the money,” Strong said. “It was about the message, and it will continue to be the message until equality is reached.”

Some of the students were a little hesitant of trying to voice change.

“I probably wouldn’t be all for it,” Chaney Reed, psychology sophomore, said. “I live in Kentucky and come from a very conservative family. It would be hard.”

“I think it’s just important for people to be equal because without open minds we’re just not going to get anywhere,” Jessica Hinkebein said. “We need to hear this kind of stuff.”

Strong also took time to educate the students about the country’s current laws for domestic partnerships.

As of now, there are six states offering legal civil unions for gay and lesbian couples.

Strong told the students the legal limitations of the same-sex marriages were limited to whatever state the couple was married in.

Strong told students she was happy with the progress the country has made, but there is still a long way to go.

Hunter Luthi, informatics senior and president of the GSA, said he felt the message Strong presented to students was something he felt close to.

“I really thought it resonated the message that we’ve been trying to get across,” Luthi said. “There has been a lot of progress, but it seems like we are still moving at a slow pace.”

Strong said she gets her inspiration to speak from her late partner, but the main goal of her presentations is to inspire change in people.

“This is not just about my sad story or the injustice that I went through,” Reed said. “That’s a big part of it, but I try not to just sit and be a victim. It’s easy to go there, but, in fighting, there is so much more.”

Since the death of Fleming, Strong has since remarried and is now expecting her first child.

Strong left the students with one final message.

“Life can be difficult, and it will be difficult — just remember that it can change, like that,” Strong said, while snapping her fingers.