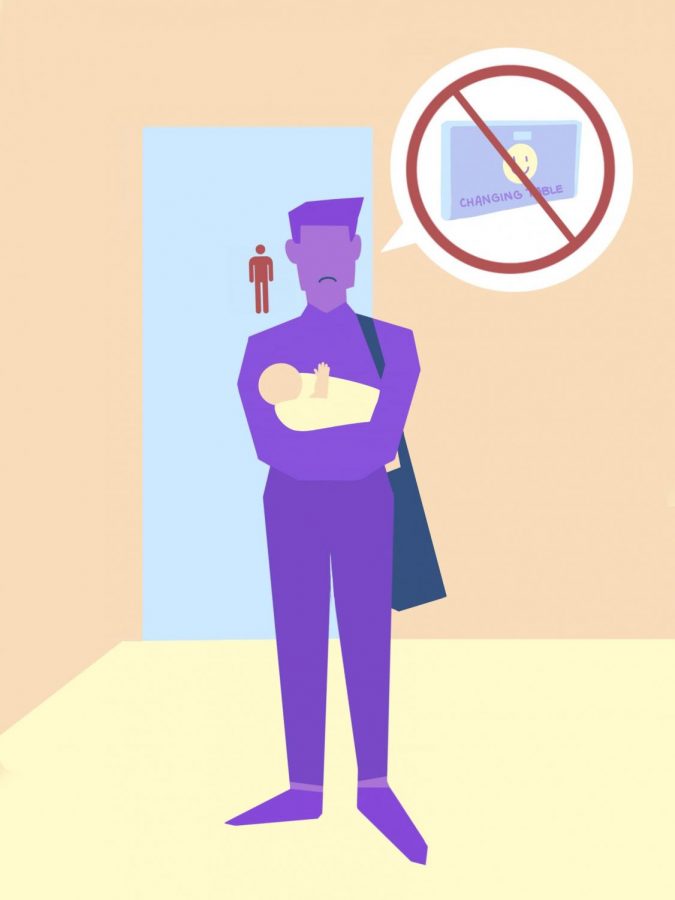 Following the menstrual care products story in a previous issue of The Horizon, individuals throughout the IUS community began to ask when IU Southeast would start to include changing stations in every restroom on campus.

Poff also stated that facility operations is considering University Center North as another location for the changing stations as well.
Adult Student Struggles
Kimberly Pelle, coordinator of non-traditional student programs and parent/facility programs and manager of the Adult Student Center, said that she has known many dads that went into the men’s room to change a baby, but then came out and changed them on the couches outside the Adult Student Center or on the floor or tables instead.

Pelle continued by saying that when she walked past them doing so, they apologized and said, “Sorry, but there are not changing stations in the bathrooms.”

“Today there are many men that are single parents or caregivers,” said Pelle.

Pelle also stated that IU Southeast is great at listening to its students.

“We need to ask the administrators for this amenity so they can help our male students in this area, “ she said. “This might just be an oversight, or something that has not been thought of as a pressing need.”
Parents’ Perspectives
Multiple parents within the IUS community shared their opinion and stories relating to the implementation of changing stations in restrooms on campus.

“I have been put in situations where there aren’t changing tables in the women’s restrooms either,” said Samantha Blits, a senior criminology and criminal justice major. “Having to change a baby on the floor is both unsanitary and embarrassing. Especially when a baby is crying.”

Jayla Rose, a senior broadcast journalism major, shared her concern as a mother with there not being changing stations in some of the men’s and women’s restrooms on campus.

“It is important for there to be a changing table in not only the women’s restrooms, but also the men’s restrooms because there are just as many single dads out here as there are moms,” she said.

Rose continued by saying that when a child’s diaper needs to be changed, it is easier for both mothers and fathers to go to the nearest restroom, which is why it is important to make sure that all restrooms have a changing station.

Halie Seng, a sophomore informatics major, is a mother of two boys.

“Whenever a parent has their child with them, it is disappointing to go into a restroom and there not being a changing station,” she said.

Seng stated that parents have a lot of supplies to carry, especially when children are still wearing diapers. She also said that it would make it easier for both moms and dads if there were changing stations in all of the restrooms.
Future Plans
“In the past two weeks, we were able to install one changing table station in the men’s restroom by the Commons,” said Poff.

Poff stated that the university is currently confirming measurements in a couple of restrooms to make sure the stations will not impede traffic flow depending on the size of the restroom.

“For budgetary reasons, we will phase more stations over the next 5 months,” he said. “Overall, I believe by the start of the fall semester that we will have all target areas completed.”