No. 22 Grenadiers split doubleheader with No. 25 Tigers 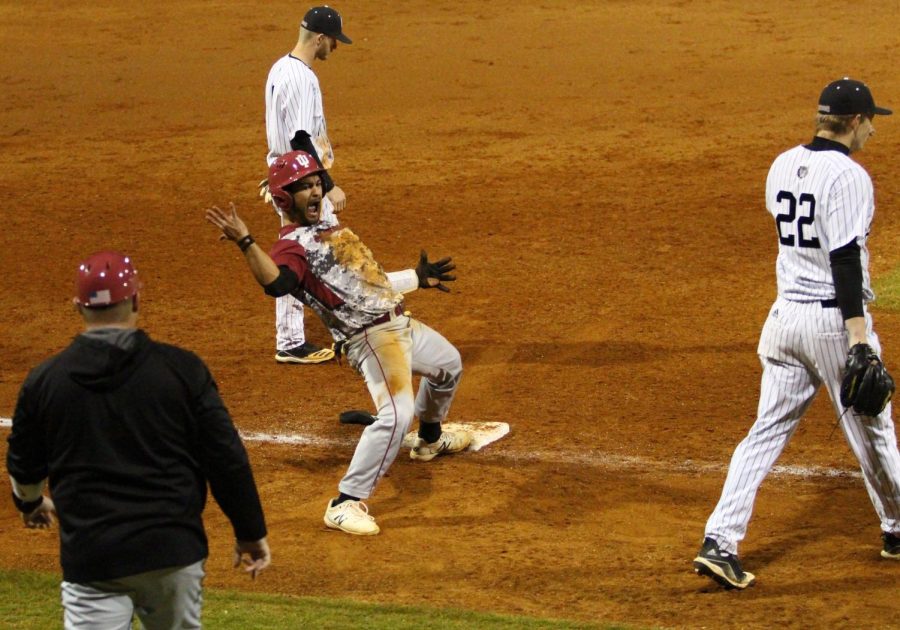 Sophomore Daunte Ducello celebrates after hitting a two-run triple in the fifth inning of the Grenadiers’ 9-5 victory over No. 25 Campbellsville, the second game of a mid-week doubleheader.

The IUS Baseball team was in the midst of one of its best starts under Head Coach Ben Reel, going 12-0 and standing as the sole undefeated squad in NAIA entering Wednesday, March 4. Seven of those 12 victories were decided by three or fewer runs.

Their determination was tested once again as the No. 22 Grenadiers traveled to Campbellsville for a mid-week doubleheader against the No. 25 Tigers.

In the day game, Grenadier right-hander Drew Hensley held the Tigers scoreless in the first inning before giving up a run in each of the next two frames. He recovered by retiring the six batters he faced in the fourth and fifth.

In the top of the fourth, catcher Brody Tanksley led off with a single. After Ben Berenda struck out, Derek Wagner hit a one-out to center to score courtesy runner Austin Wise, making the score 2-1.

In the sixth, the Grenadiers tied the game when senior Jake Scott hit a leadoff home run to left. The Tigers responded in the bottom half by loading the bases, chasing Hensley from the game before getting to reliever Brenden Bube for three runs.

The Grenadiers were not done as they rallied in the top of the seventh, rallying for three runs off one of the nation’s top relievers in Jesse Davis — whose fastball reached as high as 96 mph — to tie the game at five.

Neither side took the lead in the frame, sending the game into the eighth inning. In the bottom half, the Tigers prevailed when catcher Adbiel Morales took Bube to left on a one-out walk-off home run, handing the Grenadiers their first loss of the season 6-5.

“Nobody’s gone undefeated, it’s not going to happen and you’re eventually gonna lose,” Head Coach Ben Reel said. “We did lose in dramatic fashion, but found a way to come back in the last inning against a great pitcher in Davis and found a way to tie and extend the game, which showed a lot of guts and resiliency.” 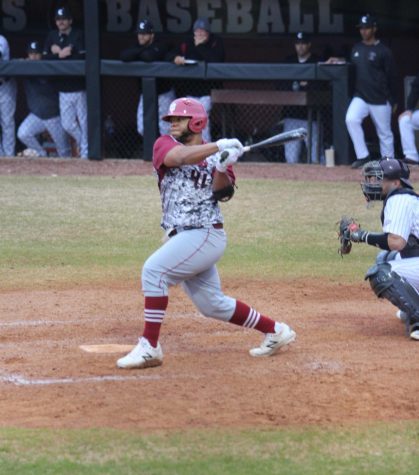 Current Grenadier senior and former Campbellsville Tiger Brandon Hubbard swings at a pitch from Tigers reliever Hunter McIntosh, resulting in a pinch-hit single to right during the seventh inning of the Grenadiers’ 6-5 loss against the Tigers, the first game of a mid-week doubleheader.

In the nightcap, the Grenadiers started scoring in the third when Tanksley, serving as the Designated Hitter, demolished a pitch from Tigers’ starter Eric Little to left for a deep two-run home run.

In the fourth, Daunte Ducello, pinch-hitting for Alec Saulman, singled to drive in Tyler Mills. The sophomore shortstop struck again the following inning, driving in a pair as he sped into third for a two-run triple.

On the mound, the Grenadiers turned to freshman right-hander Lane Oesterling, who did not disappoint in his first collegiate start. The Batesville High School product held the Tigers scoreless through the first four innings, striking out three in that span.

In the bottom of the fifth, Oesterling ran into trouble, loading the bases before a run scored on a fielding error by Scott. Zach Mann came on in relief, but walked a pair before another run scored, this time on a passed ball. Jacob Morley was then brought out of the bullpen, walking Tommy Sepulveda before forcing a Skyler Vail flyout to end the threat.

The Grenadiers scored three more runs in the sixth, two coming courtesy of back-to-back RBI singles from Tanksley and catcher Ben Berenda. While the Tigers scored three over the final two innings, Morley and freshman Connor Fires were able to maintain the lead as the Grenadiers split the doubleheader with a 9-5 victory. Oesterling earned his first win at the collegiate level, allowing a pair of runs on six hits over 4.2 Innings.

“I knew that I was going to be nervous going in,” Oesterling said. “But I knew that through all of the preparation and the great teammates I had, that as long as I threw strikes, they would back me up.”

Tanksley went 4-for-7 with three RBI in the doubleheader, while Ducello went 2-for-6 with four RBI. Overall, it was an interesting day for the Grenadiers, especially for senior Brandon Hubbard, who played for the Tigers the previous two seasons before transferring to IU Southeast for the 2020 season.

“It was both fun and exciting to come back and play in Campbellsville,” Hubbard said. “We battled in both games, should’ve won both games, but we got the best of them in the second game.”

The victory continues the Grenadiers hot start to the year, now 13-1 heading into a weekend series against River States Conference rival Ohio Christian.

With the pressure of being an undefeated team now in the rearview mirror, Reel wants his squad to keep their eyes locked on the main target; Lewiston, Idaho, the site of the 64th annual NAIA World Series.
“All that matters to us is getting better and focusing on the big picture,” Reel said. “We’re not chasing a winning streak, we’re chasing Lewiston.”