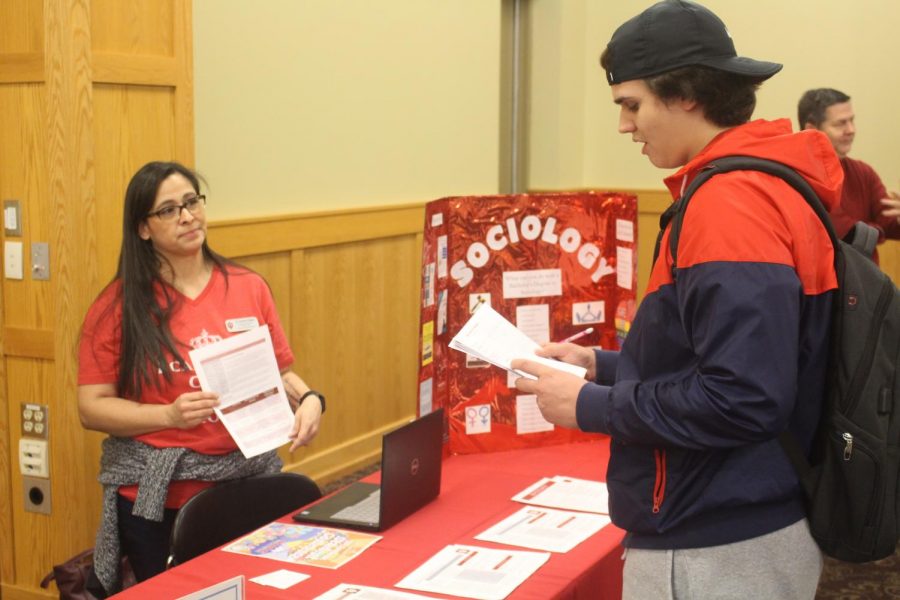 Veronica Medina (left), associate professor of sociology, takes questions from Blake Masters, who is currently undecided on a major.

IUS students surveyed and sampled the various academic programs and degree paths available to them at the Majors & Minors Fair on Feb. 19 in the Hoosier Room. Hosted by the Advising Center for Exploratory Students (ACES), the event allowed students to speak directly with other students and faculty in an attempt to discover which program best suits their interests.

Faculty from nearly every school and department of IU Southeast were in attendance on Wednesday, attempting to provide as much information to the students as possible. This allowed students to do their own research and find out which major and/or minor in which they are interested.

ACES Director Shane Thomas said this event is strategically placed in February so it is fresh in the students’ minds.

“This is an event we have every spring,” Thomas said. “It is strategically placed in February right before the class schedule comes out to help students ‘major shop.’”

Many students in attendance were undecided on a major, but also present were the Career Development Center and several graduate programs. Thomas said that the Majors & Minors Fair is a “campus-wide event for all students.”

“We have three groups [of students],” Thomas said. “One group is if they’re still exploring their majors, they’re undecided on what to major in. They’ll come out here and see what majors would be a good fit for them. The second group are students that have a major that are unhappy with it or are looking for another major to switch to. The third one is students that are happy and satisfied with their major but they’re looking to double major or add a minor.”

Many tables were run by faculty, but some of them had students who were already majors of the program. One of those students was Levi Hammer, a senior double majoring in audio production and music business. Hammer said he chose to sit at the table because it allowed him to add some hours to his internship.

“I am particularly very passionate about music,” Hammer said. “Spreading the word about the music department is just a part of … making people aware that music is something that you can study and something that you should study. Music is incredibly good for you because it trains your mind to be disciplined and also brings joy to your life at the same time.”
“If you don’t choose to know what you want to do, you are like a lost little lamb paying for college and having no idea why.”
Olivia Wells, a sophomore majoring in supply chain management, said the Major & Minors fair was a great opportunity to learn about other programs, noting that she is also minoring in both economics and French. She also mentioned that there is versatility with each degree.

“I chose to come to the Majors and Minors Fair because it was a convenient way to learn more about what IUS has to offer,” Wells said. “I learned that, for example, with English, you can do so much more than teach English. There is so much more with your degree that you can do.”

For more information about major exploration, you can contact ACES at (812) 941-2642, email them at aceadvis@ius.edu or schedule an appointment online. Their office is in University Center South, Room 106, open Monday through Friday from 8 a.m. to 5 p.m.