Derby Dinner Playhouse fires up audience with a “Disco Inferno,” dances the night away during its production of “Saturday Night Fever” 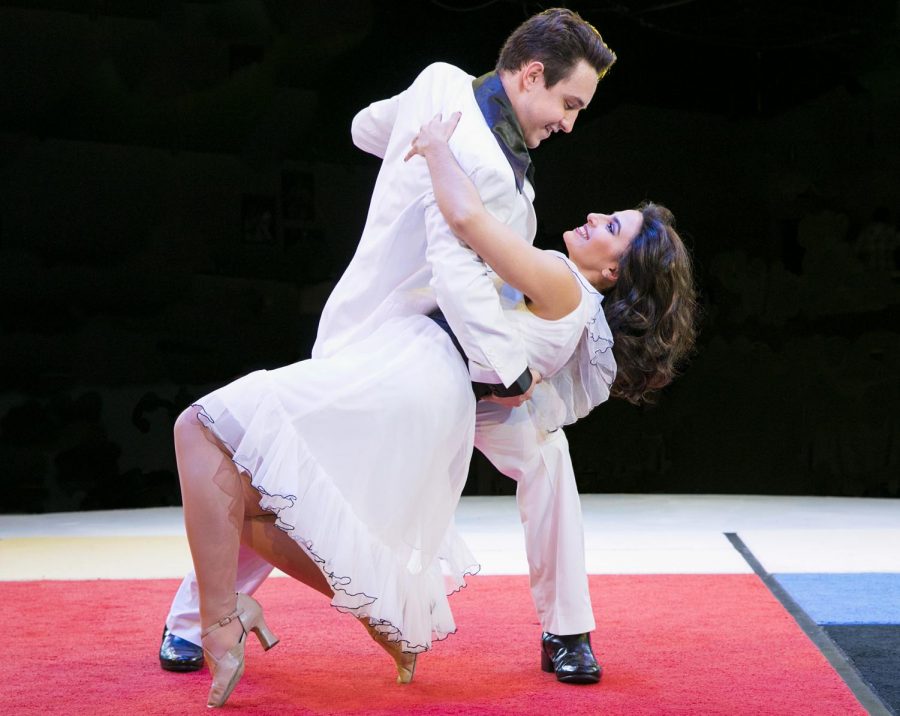 “Saturday Night Fever” features many hit songs from the Bee Gees. The production even starts off with the iconic “Stayin’ Alive,” which not only allows audience members young and old to experience a familiar song right away, but it also connects them with both the show and the performers from the very beginning.
“You Should Be Dancing”
The entire cast of “Saturday Night Fever” kept the audience entertained with the amazing choreography showcased during multiple dance numbers throughout the show. Since the plot of the show itself revolves around dancing, the choreography had to be nothing less than fantastic. High energy numbers such as “Stayin’ Alive,” “Boogie Shoes,” “Disco Inferno” and “You Should Be Dancing” demonstrated the dedication and talent that the actors and actresses at Derby Dinner Playhouse have for musical theater.

The energetic nature of the dance numbers spilled over into almost all of the other scenes in the production, allowing for a fast-paced and captivating performance.

Even when there were moments of unexpected sadness or tragedy, the show was performed in a way that kept audiences on the edge of their seats. “Slower” moments of the show did not drag on unnecessarily or bore audience members between elaborate dance numbers.
“Boogie Shoes”
The costumes in “Saturday Night Fever” threw audiences all the way back to the 1970s. Silk shirts, bell bottom pants and gold medallions were all featured quite frequently throughout the performance.

Before the show began, the stage had blue and white lights shining on three disco balls that were suspended above the stage, washing the entire room in soft white and blue lighting.

Silver streamers adorned the walls of the theater, which added an additional shimmer and sparkle while staying true to the 1970s theme.

Much like a disco dance floor from the 1970s, the stage floor was lit from within with bright white lights. Throughout the show, the stage floor’s lighting changed color and moved to the beat of the dance numbers.

The set design itself also hit the mark for the 1970s flair. One highlight was how the set and props for the 2001 Odyssey disco club helped the audience feel like they were actually participating in each of the Saturday night dances portrayed in the production.

Both the set and costume design teams did a fantastic job at fully immersing the audience into the world of funk and disco the 1970s had to offer.
“Top Of Your Game”
Perrin, Inglese, Petromilli and Banigan all amazed and captivated the audience with their respective roles of Tony Manero, Stephanie, Bobby and Annette. The chemistry between each of the actors and actresses onstage made watching the performance an enjoyable experience.

Perrin, who made his debut at Derby Dinner Playhouse portraying Tony Manero in “Saturday Night Fever,” did a wonderful job portraying a 19-year-old ladies’ man from Bay Ridge with a talent for dancing. His acting felt authentic and real and his dancing skills were unmatched.

Inglese, who also made her acting debut at Derby Dinner Playhouse, portrayed her character of Stephanie with the perfect amount of class and sass. Much like Perrin, her dancing skills were impressive and her acting was phenomenal.

Petromilli and Banigan, who are both returning members of the Derby Dinner Playhouse cast, both portrayed their versatility and showed their serious sides in this performance. The duo also pulled a few heartstrings during some emotional scenes throughout the production.

While Conte, Prefach, Glauser, Ross, Warner and Callahan each played a smaller role in the performance in their roles of Frank Jr., Flo Manero, Pauline, Gus, Double-J and Joey respectively, their supporting characters did a fantastic job of keeping the show interesting and supporting the main characters in their endeavors and challenges.
“After The Fall”
While “Saturday Night Fever” seems solely like an energetic and dance-filled production, it features its tragic and upsetting moments as well.

The production dealt with heavy topics such as death, violence, alcohol and drug use, pregnancy and depression.

The lead actors and actresses were outstanding — able to switch from comedic acting to dramatic acting in the blink of an eye when it was needed.

During the power ballad “Stuck,” Perrin, Inglese, Petromilli and Glauser each pour their heart out through the use of outstanding melodies, harmonies and emotions.

The energetic and upbeat nature of the show takes a serious turn from the first act to the second act. After tragedy strikes Tony’s friend group twice, things take a somber turn. The show pivots smoothly from dance numbers and fun moments to feelings of uncertainty and angst.
Final Thoughts
Overall, “Saturday Night Fever” is an exceptional production that every fan of funky dance numbers, music from the 1970s or the original 1977 film should attend.

Disclaimer: The Horizon received complimentary tickets for the opening night performance of Derby Dinner Playhouse’s production of “Saturday Night Fever.” However, all opinions are the writer’s own.