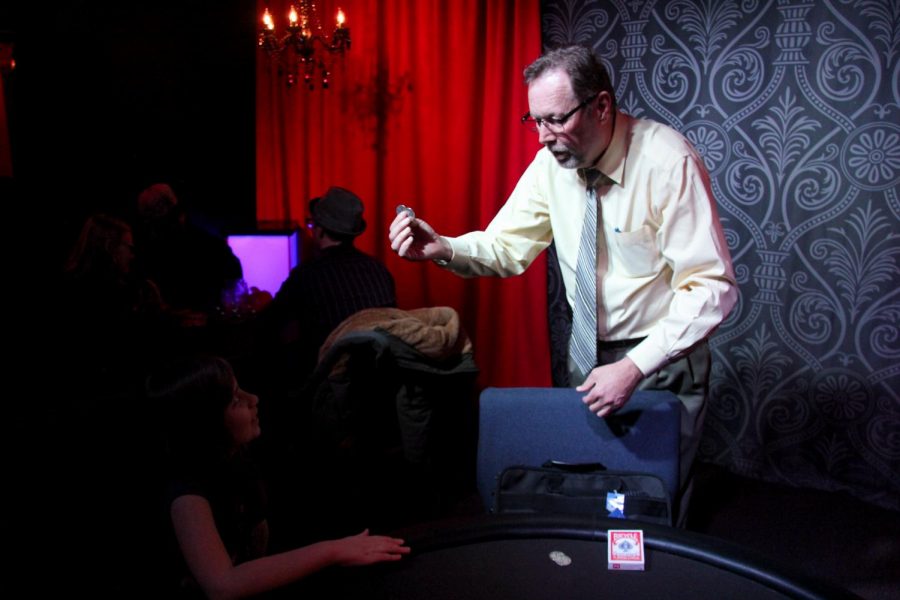 Downtown New Albany’s J&B Magic Shop and Theater on Spring Street—as people would guess—is more than meets the eye. The business acts as a store, magic consultancy firm, and a hangout spot for local magicians to practice and share their skills.

J&B’s is owned and operated by Brent Braun, a world-renowned magician and magic consultant. Braun said it is a family business, adding that his close friends Richard Darshwood and Daniel Martin help him run the store.

More than just a place to buy doves and playing cards, J&B’s is also a local hangout spot for magicians in the area—it is one of the few brick and mortar magic shops in the Kentuckiana region. The building’s main hangout room is located in the back right behind a hidden door.

Magicians from all skill levels meet up on Thursdays for two hours of practice and conversation about magic. Ken Abbot, local sleight-of-hand magician said he enjoys seeing magic enthusiasts from all ages and skill levels.

“We have some people new to magic, kids learning from a set their parents bought them,” Abbot said. “We also have people who have been doing magic for years who show up to show each other what they have been working on lately.”


Smoke and Mirrors
Eric Caldwell and Dakota Cotton said they have both been practicing at J&B’s for a few months and at the latest hangout, they spent time with the 12-year-old inquisitive illusionist Xander Heineman.

“I have only been practicing for three months and I just recently learned the top shot,” Caldwell said. “I’m only just now getting into this. You start off getting a rush from the mystery but once you know the trick it goes away. But then you start to get a rush off of your audience being amazed.”

“I really like coming to this place,” Heineman said. “It gives me a place to hangout after school and there’s a lot of interesting things to learn.”
Enchanted Educators
During Thursday Night Hangouts, Braun and Darshwood spend their time going between the store and the theater discussing, teaching and performing various tricks. They teach basic techniques and various ways to use them—from making sponge balls disappear and reappear to teleporting them from hand to hand.

Most magic is taught through books, videos and self-invention. With a majority of magic moving online and increasingly toward digital formats, Braun said it makes the experience of learning techniques in-person at J&B’s hangouts increasingly special.

Another part of J&B Magic Store and Theater is Braun’s consultancy firm, The Magic Firm. His enthusiasm for problem solving and solving puzzles is what brought Braun into magic.

“This is my favorite part of consulting is thinking [and] figuring things out,” Braun said.

Braun boasts over 20 years of experience, having consulted several magicians performing on “Penn and Teller: Fool Us.” He appeared in an episode himself during the show’s third season.

J&B Magic Shop and Theater is open from Wednesday through Saturday. More information can be found here.