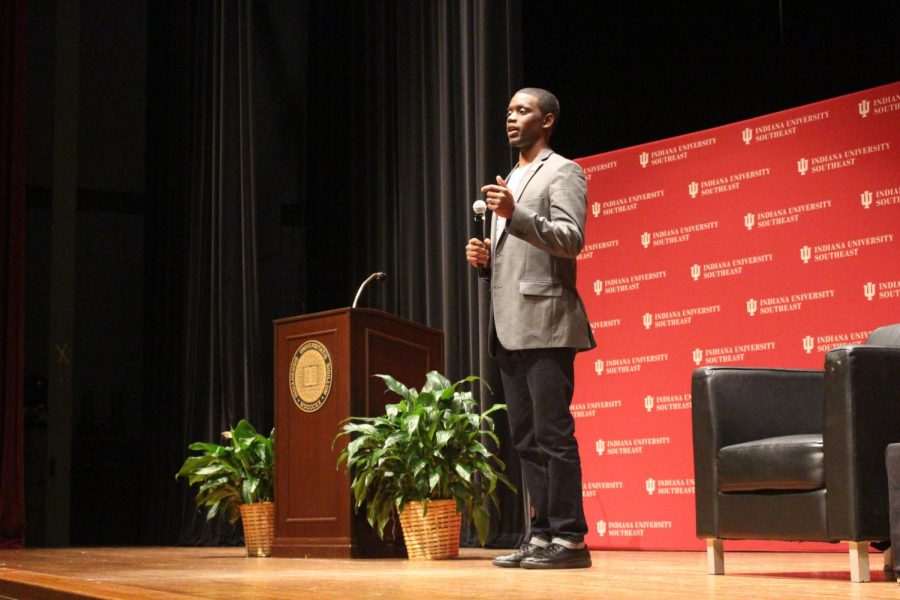 Chris Singleton explains how he was able to forgive his mother’s killer through his relationship with God.

Chris Singleton spoke about his mother’s death and how religion changed his life in the Ogle Center on Thursday, Feb. 6. The event, presented by the IU Southeast Office of Campus Life and Campus Activities Board, was held in the Stem Concert Hall.

Singleton is a former professional baseball player who played in the Chicago Cubs organization. After his release from the organization in 2019, Singleton became a full-time inspirational speaker.

His speeches are centered on the death of his mother, Sharonda Coleman Singleton. She and eight others were murdered in 2015 by a white supremacist at Mother Emanuel AME Church in Charleston, South Carolina. Singleton often explains how and why he forgave his mother’s killer and the role that God played in his decision.
Unorthodox Beginning
Before Singleton began his speech, he asked everyone in the audience to move in closer. After everyone obliged, he began speaking on the basis of his story, explaining how five numbers are the reason why he can speak about tragedy so frequently. The five numbers are one, seventy, fifty, nine and one.
“One person that was mislead and misinformed to hate black people, he walked into my church and fired 70 plus bullets while people were holding hands and praying,” Singleton said. “50 plus of those injured bodies in my church. This man took nine lives in that church and one of those lives was my mom, Sharonda Coleman Singleton.”
Singleton then stopped his speech and asked everyone in the audience to stand up and hug someone that looked different from them and also to “tell them that you love them.”

He mentioned that after he started doing this exercise, a young man stood and said he had planned to do something to himself that morning but talked himself out of it. The man said Singleton’s speech changed his life.

Singleton said from that moment on, he “would do this at every single talk” he has, because he knew firsthand that someone needed it.

Singleton feels it is important to hear “I love you” from someone that looks different than you. He said the first time he ever heard it was when he was 16 from his high school basketball coach.
Singleton’s Speech
Singleton then pivoted to how much of an affect faith has had on his life, noting that he did not always have a “personal relationship with God.” That changed when he was a freshman in college.

Singleton played baseball at Charleston Southern University. During his freshman year, on a trip to Clemson University, he witnessed a teammate writing a scripture from the Bible on his wrist. He thought, maybe I should do it too. He scrolled through his Bible app, and one verse stood out above all others: Proverbs 24:10.

After writing it all over his baseball equipment, he prayed about having the best game of his life and to bring home a victory. He had four hits, 2 runs batted in, a diving catch and most importantly, a win over Clemson for the first time in school history. That was the day that convinced Singleton God had to be real.

Singleton thought God had shown him that scripture for baseball, but he soon realized it was given to him for “the worst day” of his life. Three months later, on June 17, 2015, he received a phone call from his mom’s number, but it was not his mom. It was an unfamiliar voice telling him to get to the church as fast as possible.

Upon arrival, Singleton was asked to describe his mom, smiling while thinking about the little things she did. The lady put her hand on his shoulder and confirmed that his mom had been shot and killed. His strength was tested, but he said he used his faith to pull through.

Singleton explained he had faced adversity all throughout his life, sharing a story about how his dad planned to take him to his first baseball game. On the way, his dad was pulled over and arrested for driving under the influence. This was the moment when Singleton realized there are some things in life that people can not control.
Singleton brought up a quote from Charles Swindoll that he lives his life by. It says, “Life is 10 percent what happens to you and 90 percent how you react to it.”
He wrapped up his speech by telling a story of a man who was taught to be racist from his family but changed his ways after having a grandchild. Singleton used this as an example showing that change starts with teaching others.

He wants us all to teach with love and not hate. He said he wishes his mother’s killer had been taught to celebrate their differences instead of condemning it, but that he has forgiven him through his faith nonetheless.

As he wrapped up the speech, he was met with a standing ovation.
Q&A Session
After he finished speaking, Singleton fielded questions from the audience. He was asked about his professional career, his faith and his journey fighting through his own mental health issues.

“I know there are a lot of student athletes here,” Maurer said. “Would you have any advice for them?”

Singleton responded by saying that student athletes should be more than just athletes.

“So many of my buddies, they had no idea who they were,” Singleton said. “They had an identity crisis. I would definitely recommend you guys thinking about, ‘yeah okay I love baseball, I love softball, but who am I as a person?’ That is some advice I would love to share with you guys.”

Another question was asked by Brandon Hubbard, a senior baseball player at IU Southeast.

“I know you got to take care of your family back home,” Hubbard said. “How do you balance that with the goals you want to do in your own life?”

Singleton answered with how important it is to be there for your family any chance you get. “There are going to be times when you are gone and you have to work for two weeks straight and it is extremely tough,” Singleton said. “But, when you are home, you have to be one thousand percent present.”