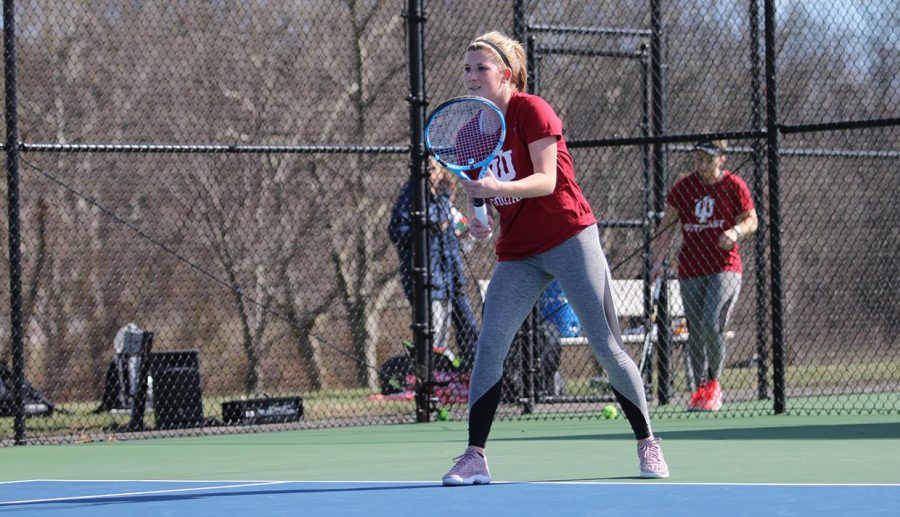 Junior Lauren Winchell prepares to receive a serve during a double header against Kentucky Wesleyan and Brescia on Friday, March 22, 2019. Photo by IUS Athletics, used with permission.

The IUS Women’s Tennis team had a solid showing in 2019, going 10-11 overall and finishing with a 6-1 record in River States Conference play—good for the second seed in the RSC Tournament. In the semifinals, the Grenadiers went down to the wire against IU East, but ultimately fell to the Red Wolves 5-4.

“We were able to finish second in the regular season after a good win over IU East who we were closely matched up with but unfortunately fell to them in the semifinals after a long, close match,” Head Coach Joe Epkey said. “We finished last season playing well as a team and gave ourselves a chance to be in the finals but just came up a little short.”

The Grenadiers followed with a decent fall, ultimately going 3-4. Coming into 2020, the Grenadiers return key players from last year, including the lone senior in Jeannie Soto, juniors Camille and Lauren Winchell, and sophomore Hallee Miller.

Joining the Grenadiers’ ranks are a trio of freshmen in Emma Ellis (Jeffersonville), Kate Heuchan (Franklin Community), and Kendel Hieatt (Assumption), as well as Sarah Vanisenberg, a sophomore transfer student from the University of Louisville. Rounding out the newcomers is Chloie Yost, a junior at IU Southeast joining the team for the first time this year.

“I’m very excited for the season as we have new girls who are going to contribute a lot,” Soto said. “We have a really deep team with lots of talent. We’re coming into this year expecting to win [the] conference for sure.”
RSC Competition
As it has in years past, the RSC will be a hotbed of competition for the Grenadiers. Still considered the top team in the conference is Asbury University, entering the season ranked at the top of the RSC Coaches Preseason Poll. The Eagles are looking to capture their fifth consecutive RSC Tournament title.

Another team that will provide the Grenadiers stiff competition will be the aforementioned Red Wolves of IU East, led by reigning RSC Player and Newcomer of the Year Thais Mendez. IU Kokomo and Midway University are also teams that are expected to show improvements in 2020.

“We’ll have to play some good tennis against those teams in order to beat our conference this season,” Epkey said. “We’re good enough to play for a championship this year and give ourselves a good chance at the tournament finals, so I look forward to seeing what we can accomplish this year.”

The Grenadiers open the season on Feb. 22 when they host Campbellsville University, who are currently receiving votes in NAIA. The match is scheduled to start at 5 p.m. at the Southern Indiana Tennis Center in Sellersburg, Indiana.