Nicole Curtis spoke about her journey into home restoration at the Ogle Center on Tuesday, Feb. 4 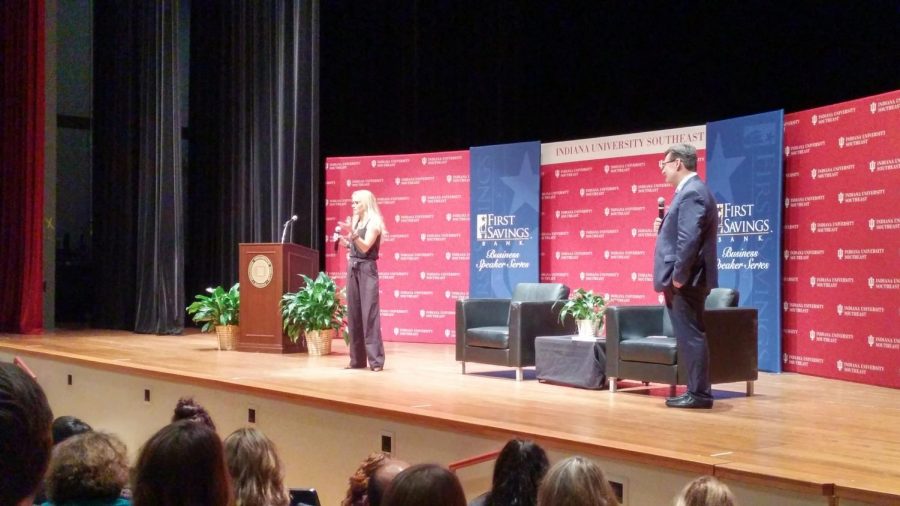 Nicole Curtis, host of HGTV’s Rehab Addict, gave a speech on campus Tuesday describing her ascent into the home restoration business. The event was part of the 2020 First Savings Bank Business Speaker Series, which aims to encourage students and improve education in Indiana.

The presentation began with an introduction by Larry Myers, president and CEO of First Savings Bank, who thanked people for coming despite the cold and rain.

Curtis began her presentation by recording a promo for her show on her phone with the audience in the background.

Curtis then accidentally deleted the recording and prompted the audience to shout the phrase a second time.
Curtis’ Background
Curtis went on to describe her childhood. She grew up in a small town outside of Detroit to a blue-collar family and had her first child at age 21.

“I was always taught to value hard work and the dollar,” she said.

She initially planned to become a teacher. Curtis then stated that she received 87.5% of an elementary education degree.

She said she made money by cleaning houses, which was made difficult at the time due to the 2008 financial crisis. Detroit was hit hard by the recession and many people could no longer afford homes.

Curtis eventually moved to Minneapolis to become a designer. She was eventually contacted to host a TV episode, where she was brought in to promote a bungalow. Upon arriving, Curtis noticed many aspects of the building that she did not like.

“[The house] was my worst nightmare,” she said, listing several grievances.

Rather than promoting it anyway, she decided to critique it with honesty.

Curtis then described how she prefers simple designs and that she likes to tell stories about the homes she restores, which is the subject of her book. At the end of her speech, Curtis left the audience with one last statement.

“Ten years looking back, it’s a whirlwind,” she said.
Audience Q&A
After her speech, Curtis took several questions from the audience. One person asked about how she found out what she wanted to do as a career while in college.

“It’s odd that we have to pinpoint the rest of our lives at the beginning of our lives,”  Curtis said.

She added that people should do whatever gives them joy.

“I still don’t know what I want to do when I grow up,” Curtis said jokingly.

Another person asked her for advice on working in a male-dominated field.

“Nothing is male-dominated, ever,”  Curtis said. She then added that people should stop saying that.

“Go home and watch my show, people!” she said.