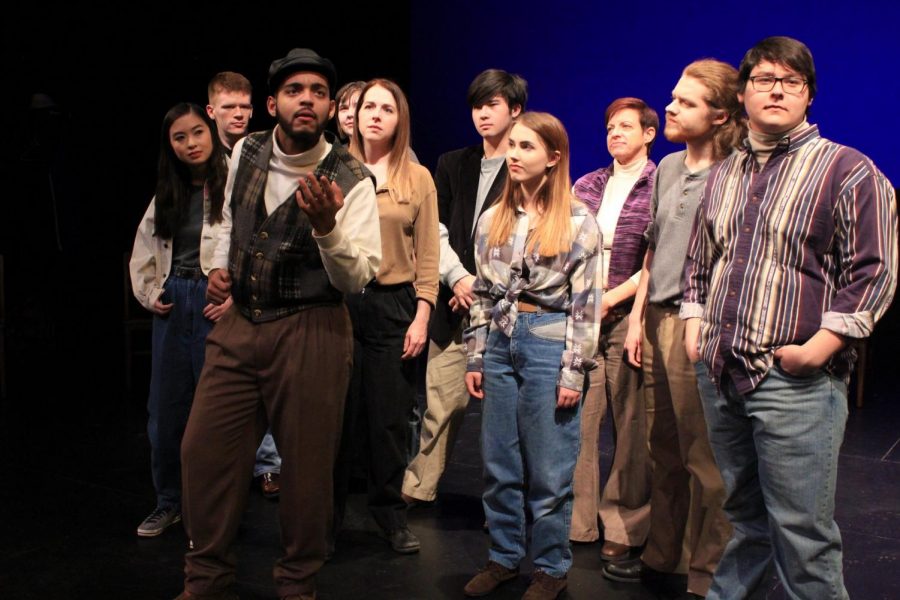 In 1998, Matthew Shepard, a 21-year-old gay college student from Laramie, Wyoming, was murdered by Aaron McKinney and Russell Henderson. The events surrounding the tragedy were later written about in “The Laramie Project.”

IU Southeast’s Theater Department hosted a production of Moisés Kaufman’s play from Dec. 5-8. “The Laramie Project” was written by Kaufman and the members of the Tectonic Theater Project.

With the exception of one cast member, all of the actors and actresses were either freshmen at IU Southeast or appearing onstage at IU Southeast for the very first time. Both community members and IU Southeast students played roles in the production.

The play was produced in conjunction with the IU Southeast Common Experience Program. 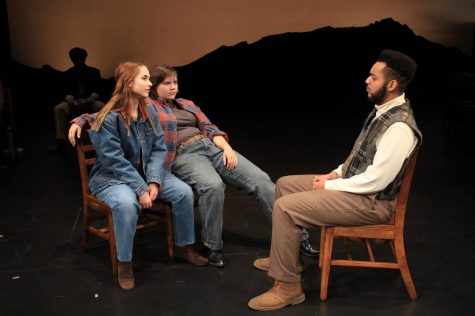 Costume and Character Changes
The costume changes in the production were done in a very unique way. The costume racks were on both sides of the stage for the entire show and almost every costume change was done onstage in front of the audience.

The costume changes were simple yet effective, mainly consisting of putting on a jacket or a hat.

The character changes were done in a similar fashion to the costume changes. Almost all of them were done onstage. If actors or actresses were not in a scene, most of the time they would be sitting in chairs at the back of the stage participating as observers to the scene.

Overall, the character changes were done fairly well. There were only one or two instances throughout the show where it was mildly confusing to tell which character was being portrayed.

Both mildly confusing instances were due to one actor or actress playing more than two roles in their own individual scene where the characters were all interacting with one another. As long as the audience paid close attention, however, it was not that much of an issue. 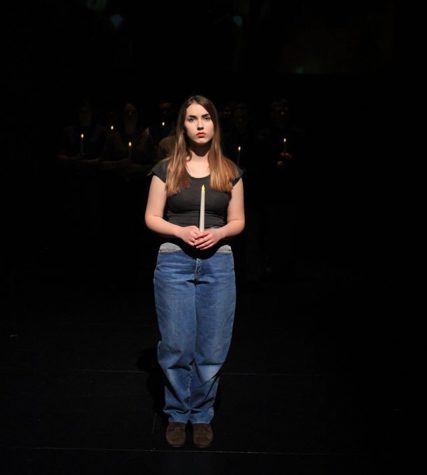 There were many technical concepts in the production that were done well, including the use of a projection screen, audio clips and unique lighting effects.

The projection screen behind the stage was used in almost every scene to portray the changing colors of a beautifully lit sky with twinkling stars appearing every so often to demonstrate how the town of Laramie sparkled.

The screen was also used on various occasions to show real footage from a candlelight vigil for Shepard and various coverage of the trial of Henderson and McKinney.

One unique lighting effect was the use of light shaped like the outline of angels used in a very powerful and emotional scene that depicted Romaine Patterson and Fred Phelps’ standoff at the trials of Henderson and McKinney.

Patterson, played by Von Allmen, came up with a plan to deflect the hate that Phelps, played by Stroud, brought to one of the trials by picketing it. That plan was called “Angel Action.”

“Angel Action” was intended to take away the hate that Phelps and the Westboro Baptist Church brought to the trial by having individuals dress up as angels with giant angel wings and block out the hate. The angel wings from the costumes would surround Phelps and prevent the people who were attending the trial from seeing and hearing Phelps.

The substitution of lights shaped like the outline of angels shining on Patterson instead of having the cast dress up in angel costumes was an interesting and minimalistic take on the scene. The lights uniquely symbolized all of the protection and acceptance that was used to combat against Phelps’ hate and negativity. 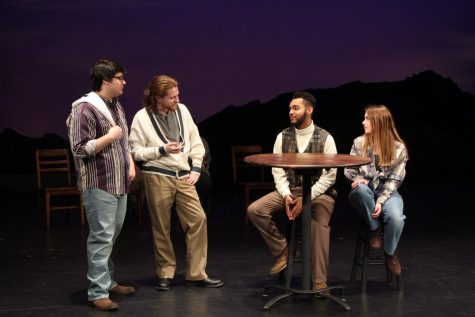 Final Thoughts
The IUS Theater Department’s production of “The Laramie Project” was an emotional and at times vulnerable show that gave audiences a more in-depth look into the effects of a troubling tragedy on a close-knit community. The minimalist nature of the show allowed the acting and technical effects to shine through.