When the bottom falls out

What goes on when our government decides to take a break? 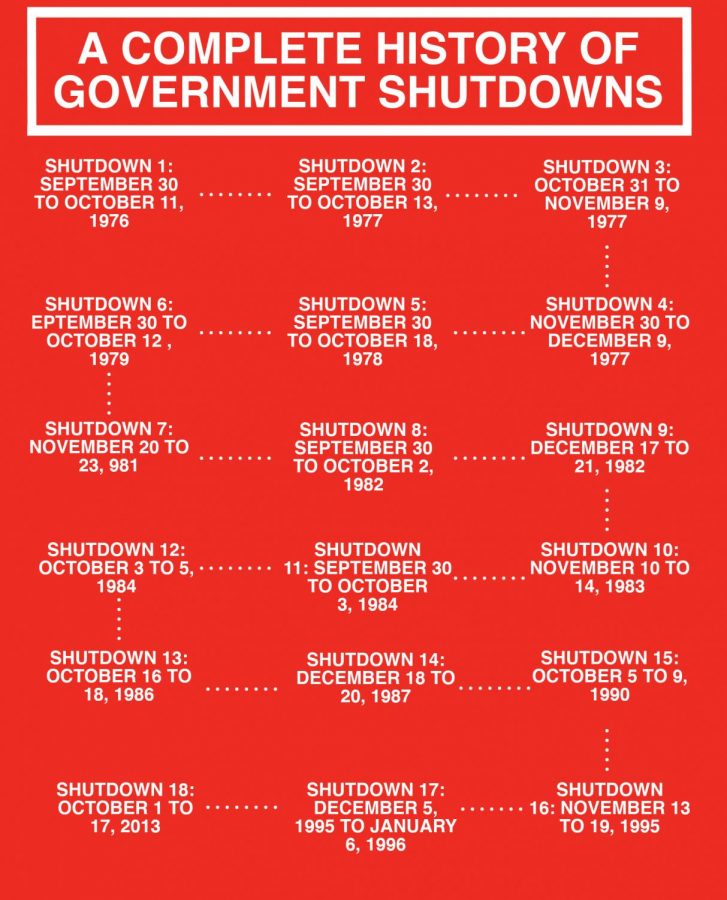 The government came to a screeching halt on Jan. 20 and didn’t return to business as usual until Jan. 22.

What Is a Shutdown?

Throughout the years, beginning in 1980, the U.S. government has had frequent shutdowns due to failure to pass or sign appropriations. Appropriations are legislations that fund government operations and agencies.

The current process for dealing with the national budget and appropriations comes from the Antideficiency Act, with the most recent amendment from 1982. Essentially, the federal government is prohibited from beginning a contract without full funding.

Because of this, when there is failure to pass or sign appropriations, a shutdown occurs involving any activities that are impacted. This requires the furlough, or temporary leave, of non-essential government personnel. Those who are furloughed still receive pay for their leave, but cannot receive their payment until the shutdown is over.

Since the enactment of the Antideficiency Act, there have been 19 budget funding gaps and eight of these have resulted in government employees being furloughed.

The most recent two government shutdowns were the first in over 5 years.

The shutdown occurred after opposing parties, the Democrats and the Republicans, refused to pass vital legislation regarding the Deferred Action for Childhood Arrivals (DACA) immigration policy. There was also discussion over whether or not to funnel in funding toward building a wall between Mexico and the U.S.

“They don’t have a budget. They just came up with a temporary solution that would last a couple weeks and then they’ll have to find some other solution,” Wert said. “What I’ve heard might be going to happen is that they’ll come up with a year-long continuing resolution, so the budget would be the same as last year.”

In September of 2017, President Donald Trump rescinded the DACA policy, which was funded by the Obama administration in 2012.

Trump announced that Congress would have until March 5 to decide whether or not to apply the new policy to the approximately 800,000 individuals that were enrolled in the program at the time of its termination, or to grant them immunity from deportation.

Ashley Lopez is an IU Southeast student studying pre-law as well as a DACA recipient. She says that if DACA is fully destroyed, this will make her dreams of graduating college nearly impossible.

“They know nothing different, they have been in the United States from the moment they were born,” Lopez said, speaking of the current illegal minors. “With DACA ending, they will not be able to get work permits or be allowed to attend school like everyone else.”

She hopes to help young children complete their goals and live the life that their parents tried so hard to give them by coming to the United States.

“They are no different than you or me. Their parents wanted to give them a better life and that dream is being shattered by a piece of paper that validates their citizenship,” Lopez said.

She also said that she feels like a bargaining chip as the Democrats and Republicans debate on how to proceed.

The long-term economic effects of the most recent government shutdown won’t be made aware for some time.

However, some of the consequences of the last government shutdown, that took place in 2013, are as follows:

850,000 individuals per day were furloughed
$2 billion in lost productivity (from furloughed employees who were paid afterward)
Negative impact on trade due to import and export licenses put on hold
National park communities suffered from loss of tourism
Small businesses had federal loans put on hold
Approximately $4 billion in tax refunds were delayed
Health and safety inspections were postponed
$24 billion of lost economic activity

The government recently shut down again on Feb. 9 for the second time in three weeks. Sen. Rand Paul is against the new massive budget deal that would potentially add hundreds of billions of dollars in government spending.

He is the main reason for the roadblock that’s preventing Congress from passing the bill. The Republican used his objection, allowed under Senate rules, to delay a vote until after 1 a.m. Friday. By the time the deal was passed, the shutdown had already been in full effect for two hours.

Paul believes that the spending caps should be kept because they are already too high. He saw it as “out of control government spending.” President Trump signed the $400 billion budget deal Friday to increase spending and reopen the government.

After signing the bill, Trump tweeted: “Our Military will now be stronger than ever before.”

This bill does nothing to address immigration, which is where the Democrats’ problem lies. The budget also puts the U.S. on track to reach a $1 trillion deficit.

Nancy Pelosi, a democratic minority leader for the U.S., was pushing to hold out longer for an immigration bill. She knew the recent budget deal signed would not put forward a solution for the DACA “dreamers” who are still in jeopardy of deportation.

However, her efforts were in vain, as the House passed the legislation 240-186, ending one of the shortest government shutdowns.

This was a legislative victory for the Republicans. The approved budget resulted in increased domestic spending by $131 billion and increased defense spending by $165 billion over the next two years, with no decision for the former DACA recipients.