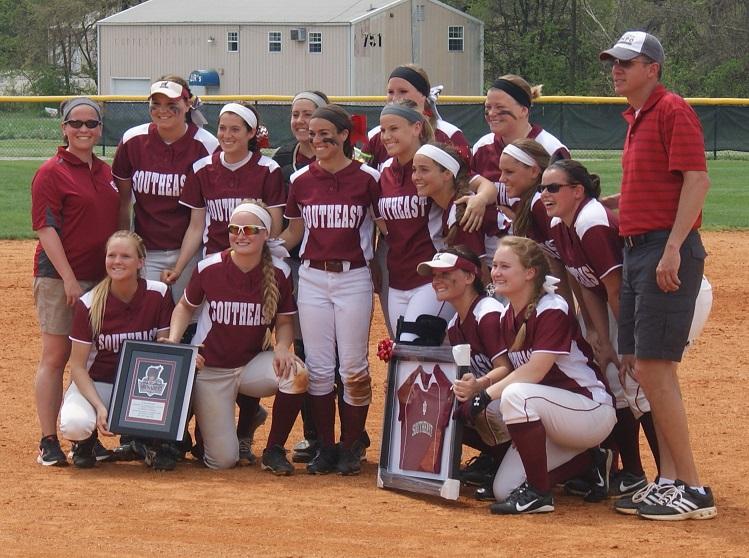 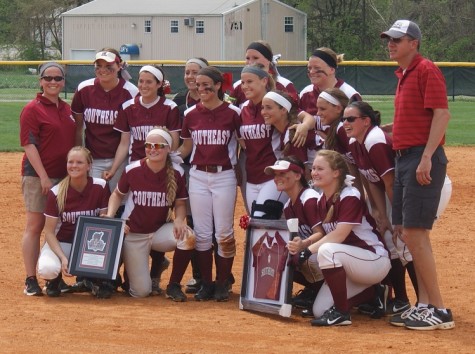 In game one of the double-header, sophomore pitcher Jessica Leanhart, got the nod for the Grenadiers.

In the bottom of the second, sophomore left fielder Cadie Povaleri, knocked in a run with a bunt and later scored on a sacrifice fly by sophomore center fielder, Brooke Barnett.

The RedStorm were able to get a run in the third off a single, but the Grenadiers were able to counter and score a run in the bottom half of the inning on a sacrafice groundball by junior shortstop, Brookelyn Visker, that scored sophomore second baseman, Morgan Klosterman.

Visker knocked in another run in the bottom of the fifth on a single to left.

The Grenadiers won game one 4-1.

“As a team we came out and really came through,” Leanhart said.

The Grenadiers continued their success in game two of the double-header.

In the bottom of the third the Grenadiers were able to take advantage of runners in scoring position.

With runners on second and third, freshman third baseman Montanah Rogers, knocked in a run on a fielder’s choice.

The Grenadiers would score another run off an error on Rio Grande. Rogers would later score on a groundout.

Both teams scored one run each in the sixth to make it 4-1, and then the RedStorm started to comeback in the top of the seventh inning.

The RedStorm scored a run early on in the seventh, but then Klosterman was able to make a big double play to halt Rio Grande’s comeback and seal the victory.

Witten spoke about his team’s performance in Saturday’s double-header.

“We had good pitching, our defense was solid, good timely hitting and base running was excellent,” Witten said.

Sander’s senior season came to an end early when she suffered a severe injury trying to avoid a collision with a teammate, while attempting to catch a foul ball in a game against Asbury on April 6.

In the bottom of the sixth inning Sanders came in to pitch run for the Grenadiers. The appearance made it 150 career games played as a Grenadier, putting her in into sixth place in most games played by a Grenadier.

When asked about her time here at IU Southeast, Sanders said that it was the best time of her life.

Witten had nothing but nice things to say about Sanders.

“She has to be in the mind of all the players I’ve coached, the most consistent player day in and day out, “ Witten said. “She comes ready to play every game and always makes the good plays and the routine plays.”

Witten also noted that Sanders brings some experience to the team for the upcoming conference tournament with the experience she’s had in the KIAC tournament in the past.

Sanders said that her role hasn’t really changed much on the team since her injury.

“I’ve had more of a coaching role than a player role, although having the captain role is a lot like the coaching role anyways,” Sanders said.

The Grenadiers entered the KIAC tournament as the favorite with a 20-3 conference record. They defeated Alice Lloyd 8-0 in the first round, and beat Carlow 9-1 in the second round. Their next matchup will be in the semi-finals against this same Rio Grande team. First pitch is Friday at 1 p.m. at Millennium Park in Danville, Kentucky. All results and stats are posted at iusathletics.com.