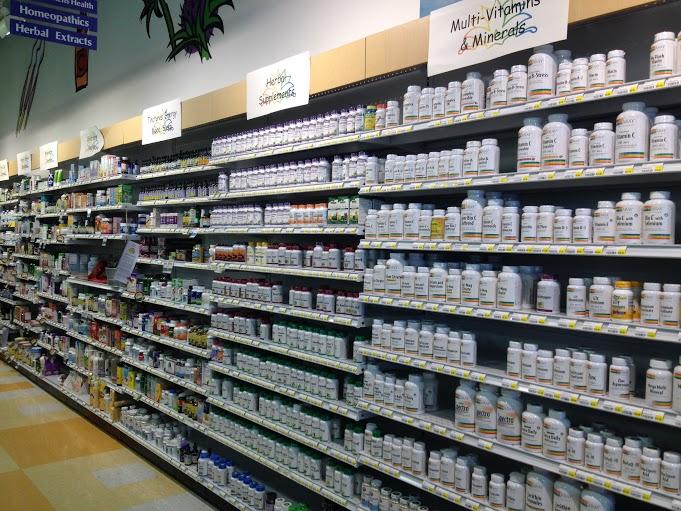 Rainbow Blossom sells many natural medicines and vitamins that can help with colds or feeling your best.

Most students spend the few minutes before an exam studying, but psychology sophomore Autumn Hockenbury spent her few minutes vomiting up all she had eaten that day in a bathroom stall on campus. Hockenbury was so sick that she had to take a nap in her car before being able to make the drive home (obviously rescheduling her exam that day).

Being sick can take its toll on your mind, your body, even your wallet. Aside from health insurance, there’s copay ranging from $25-$30 a visit plus the price of medication you are prescribed during your visit.

Hockenbury said this nasty stomach flu that invaded her immune system happened about a year ago, and changed her habits forever.

“I had just started college and I was eating awful. I mean, every morning I was eating McDonald’s and Monsters,” she said. Hockenbury said she strongly believes her poor diet was the major cause behind her illness.

Hockenbury said she didn’t want to pay to go to a doctor, so she pushed through the illness. But as soon as she was better, Hockenbury knew she needed to make some changes.

“I changed my dieting habits and really just how I viewed my health,” said Hockenbury. This included eating more fruits and vegetables, getting plenty of sleep, taking a daily multivitamin and getting exercise at least three times a week.

Hockenbury recommends natural ways to strengthen your immune system like vitamin C, nutrient-packed smoothies, and even putting local honey in your tea to help combat allergies.

“What you’re doing is putting the histamines from local flowers and plants into your body, and building up your immunity to those histamines,” said Hockenbury.

Before Hockenbury began this healthy lifestyle, she said she would get sick two or three times a year. This past year, she has not been ill once. She accredits her good health to four major things: sleep, water, a balanced diet and watching her levels of stress.

And while leading a healthy lifestyle can prove difficult with a hectic college schedule, Hockenbury says it’s doable.

“Plan your schedule around getting sleep, and if you want to eat healthier, prepare meals over the weekend,” she said.

“The wet, cold weather is kind of a form of a shock to the body, so to speak,” said Myers. Myers explained that things such as harsh weather and harsh bacteria put a lot of demand on the body, usually resulting in getting sick.

Myers said the best preventative method is keeping your body in check.

“From my framework, illness really comes about from imbalance in the body systems. The stronger our immune system, the better we’re able to cope with extremes of any sort,” she said.

And building your immune system, according to Myers, is something that begins at the home. Myers, who worked with holistic physician Dr. Jim Roach in Midway, KY for a  year, says she is very much a believer in self-healing.

“I definitely believe there’s a place and a time where we need to seek out physicians to diagnose illness and disease, but I think sometimes we go before we give the body a chance to heal itself,” said Myers. Myers joked for example that she wouldn’t get acupuncture for a burst appendix. But for more minor health issues, Myers said that there are plenty at-home methods that actually have a very scientific basis.

Myers said that when she feels a cold coming on, one of the things she will do is make a big pot of garlic onion soup.

“I mean, I’m talking 15 or 16 cloves of garlic,” said Myers. “You drink it and its amazing how you can sort of ward off a cold that way.”

Myers named rest, fluids (especially teas), vitamin C and a good multi-vitamin as a few ways to cure and prevent getting sick this winter.

But Myers said it all comes back to our immune system and what we put into our body. “The thing is, if you’re loading your body up with lots of toxins– bad food, high fructose corn syrup, chemicals in your body lotions– your immune system will detox, but it takes its toll,” she said. Myers said you want your immune system to really kick in when you start to get ill, and the way it can best do that is if it’s less distracted battling those bad food and chemicals.

“And sleep, of course, is critical to good health,” Myers adds.

But not every at-home remedy you see on Doctor Oz or Pinterest is accurate, warns Myers. She said to be aware of anything that promises a “quick fix”, but ultimately, to do the research on your own.

“I think we live in a world where our modern medical system is based on altering the chemistry in the body through prescription drugs, so most physicians are trained in prescribing. And there’s certainly a place for that. But there’s another whole concern that I have that is about the root causes,” said Myers.

Myers said she believes the root causes to be much more simple than we think– such as imbalance in our bodies resulting from lack of exercise and poor eating. And rather than focusing on treating the symptoms, we should be focused on treating the issue at its core.

Jessica Hager is a cashier at natural foods store Rainbow Blossom on Charlestown Rd. Hager has not been to the doctor in five years.

“I kind of got fed up with the whole system,” said Hager. Aside from experiencing unwanted side effects from medicines she was prescribed in the past, Hager said she can’t afford the costs that rack up between copay, medications and health insurance. So for the past five years, Hager has let her body cure any illnesses with help from some natural medicines.

“If I know that I’m getting sick, I’ll usually make my own teas with fennel, ginger, turmeric root and a bag of whatever tea that I feel like drinking that day,” said Hager. Hager explained that the ginger and turmeric help kickstart the immune system while simultaneously helping with aches and pains caused from inflammation.

Hager said she sees a lot of sick customers come through Rainbow Blossom, especially during winter. One of the more popular products among customers are essential oils, which are fragrant oils extracted from various plants. Aside from smelling good, Hager said that the oils can have several health benefits, naming lemongrass as being helpful to fight nausea.

Aside from essential oils, Rainbow Blossom sells many other natural medicines including a popular herbal cough medicine called ACF Buried Treasure, menthol lozenges, and peppermint and clove oil to help with sinuses.

Though Hager isn’t a fan of going to the doctor, she said she does think it’s necessary under certain conditions.

“I have a lot of customers who come in and guess what they have based off of Web MD, and then they’re treating something totally different than what they actually have,” said Hager. She advises against treating yourself when you don’t know what it is that is hurting your body. Putting the wrong supplements into your body, said Hager, could be potentially damaging.

But having said that, going to the doctor isn’t always a necessity, says Hager. “If you have a feeling you know what it is, and it’s happened to you before, then by all means go ahead and take care of it yourself.”

And if taking care of it yourself interests you more than a potentially expensive trip to the doctor, you can check out Rainbow Blossom at 3003 Charlestown Crossing in New Albany, or visit www.rainbowblossom.com to get ideas.